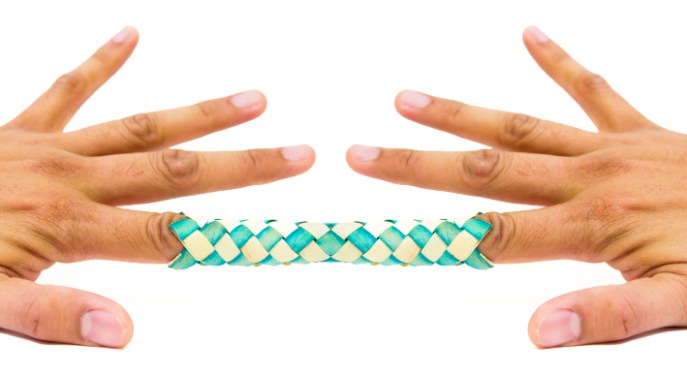 This novelty toy is a lot of fun for kids. The finger trap is a cylinder-like device. When you put a finger in each end and try to pull your fingers out, the cylinder tightens up. The more you struggle to get out of a finger trap, the more stuck you become, and the more trapped you feel.

The finger trap is a great analogy for anyone working with or ministering to the child of divorce. Many times in workshops and seminars, I take along a few finger traps and have people experiment trying to pull their fingers out. The key to escaping is to relax the fingers and then gently pull them out.

The harder the child tries to fit in, the more the issues bubble up. Basically, the child of divorce brings all the issues from the previous relationship or relationships into the newly formed family. Many times, the child has seen a lot of people come and go in his short lifetime. After trying to attach to some of these people only to see them leave again, the child is leery of forming yet another relationship that might disappear.

Something else people forget: children quickly adopt the behavior of those around them. In other words, if someone who smokes a lot is around a child, the child will pretend to smoke. If a parent is quickly affectionate to new persons, the child will become indiscriminately affection to people, even strangers. Children pick up on personalities, mannerisms, and characteristics. “If you’re a little kid, you don’t have the filters and distractions adults can use to deflect another person’s dark behaviors.”[1]

Harsh and demanding become the norm

Unfortunately, most people become harsh and demanding, trying to force the child to accept the newly formed family. Punishments abound, and the child feels more trapped than ever before. The more trapped and stuck the child becomes, the more stress he lives under.

When stressed and worried, children don’t have the thinking skills to help them analyze, organize, or remember what they are supposed to do. They simply react from the lower level of their brain:

Someone looks at them wrong, and they lash out.
Another child walks toward them, and they instinctively hit or kick.
Someone approaches them with what they perceive as an angry look, and they read the expression as dangerous.
When new stepsiblings enter the picture, the children demand more attention from the very person they have shunned—the stepparent.
They use negative acts to get negative attention because to them, it is attention after all.
The birth parent may wonder what happened to the loving child. When thrown in this situation, many moms worry that they aren’t being good parents. There may be pressure from the new partner to toughen up. So while the child gets stuck and feels more and more trapped, now the mom is also feeling stuck. Both parent and child are pulling harder to get out of the self-perpetuating finger trap.

The child begins to act out at school or at day camp during the summer. Deeper and deeper, the behaviors go. And the harsher the punishments become.

As children’s ministers or church volunteers, what can you do?

You can help both adults in the newly formed family understand the issues I’ve mentioned. Just like the way out of a finger trap is to relax the fingers, so too, it is the way out of the vicious circle of acting out and punishments.

If you want to use the analogy of the finger trap, you can make your own or let the parents make some for use in their homes. http://www.wikihow.com/Create-a-Chinese-Finger-Trap