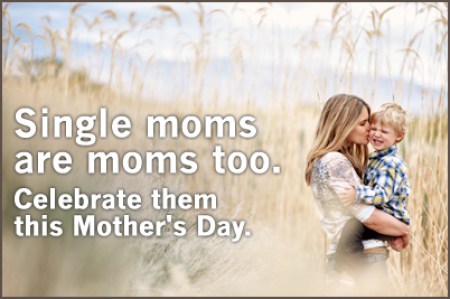 Mother’s Day is coming up. Have you thought much about how you might honor the single mothers in your congregation?

For me personally, Mother’s Day was one of the hardest days of celebration when my kids weren’t with me. I know other single moms who feel the same way. Many single moms purposefully don’t attend church on Mother’s Day when they don’t have their kids because it hurts too much.

Single moms deserve the honor of being acknowledged on Mother’s Day. When you get to know single moms, you begin to realize they are the most determined group of people you will ever meet.

Single moms have reared some amazing adults. Single moms today are raising the next generation of doctors, lawyers, scientists, ministers, politicians, teachers, parents, and every profession you can think of, including a U.S. president.

Here are just a few things it takes to be good single mom. Perhaps you could mention one or two of these traits when you thank a single mom for raising her kids alone or send her a card.

If anyone had ever sent me a card praising me for anything on this list, I would have burst with pride and praised the Lord for someone acknowledging I was contributing to the welfare of my children.

How will you honor the single mom in your church? Or perhaps the single mom who doesn’t attend your church but brings her kids—how will you honor her? This might be a time to impress on her that you care not only about her kids but also about her. It can take nothing more than handing a carnation to her kid with a note attached that says, “Happy Mother’s Day. We appreciate you raising your kids alone.”