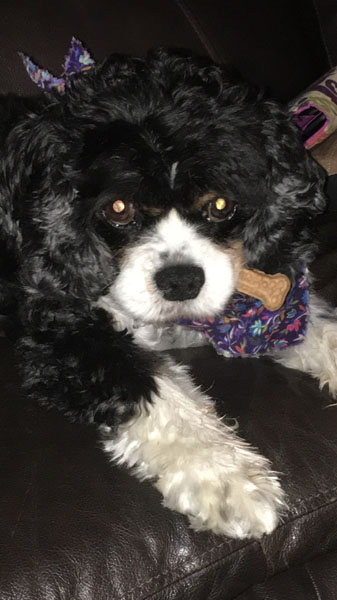 Tonight is a sad night. It’s the night before I’m putting my pup to sleep. She has been with me through a lot. We brought her home the night after my father’s surgery at Mayo. I remember it as if it were yesterday, but in reality it’s been 11 years ago and a lifetime in tears.

As I was getting the doctor’s report on my father’s surgery Jon kept burning my phone up until he finally gave up and called my brother and told him to have me call him ASAP. Fearing that it was something serious, I called him right away and he said I’ve found the perfect dog for us. He had been looking for a King Charles Cavalier for a few months and finally found one on CraigsList. She was in Lakeview so he wanted me to get her on my way home from Rochester. He had not seen her but was confident she was to be ours. I was a little more hesitant. You see, we had just lost a puppy a few months back from getting into some rat poison and that experience was difficult on me and I wasn’t sure if my heart could handle another one. But one look at her piercing eyes and I was sold. I knew she was meant to be with us too. So that began our life together. We did not know what was coming down the road, but God surely did and He knew I would need that sweet pup to love me unconditionally.

The first night with her is one I will never forget. It was late, dark and Jon took her out to pee. Of course, being somewhere new and being scared, she darted and ran off.  That pursued into an all night search on foot, hollering “Violet” throughout the streets. You see, the previous owners named her “Violet” but Jon could not stand that name so as soon as she got home he was determined to change her name. So seeing him calling for “Violet” is a memory that makes me smile to this day. Anyway, it wasn’t until after 7 that next morning that we were able to find her and she was hiding down the street in a culvert.  Jon picked her up and carried her home in his arms reassuring her that she would never have to be scared again. You see, she was an abused dog. The person we purchased her from had rescued her from a breeding house after she saw how horribly she was being mistreated. It wasn’t long before she stole the hearts of everyone in the home and we all decided to name her “Kallie”.

Kallie was the perfect dog. She did nothing but cuddle and sleep. The kids thought that was kind of boring and a sorry excuse of a dog, but Jon & I loved her! She was skittish a lot because of the abuse so she needed slow reassurance that we would not hurt her and only wanted to love her. And it wasn’t long before her and I formed a bond that would be so important in days to come.

Kallie was always Jon’s little baby. He loved that girl and wanted to take her everywhere. She went on many trips with us, loved to camp with us and joined us into Canada many times. She was an easy dog. Never barked. Never got over excited. Never bit. Never jumped on people. Never chewed a thing. At the same time, never learned tricks, never played fetch and never over exerted herself. That’s why we loved her so much. She just snuggled.

Through the years, she’s 15 now, we have seen her loose her teeth, her vision, her hearing and now her kidneys and heart are failing too. But she’s never lost her love for us and the bounce in her step whenever she sees me.  To have her welcome me home has become a normal routine, one in which I will miss very much. But there was not a more important time for us than when Jon went home to heaven.

We were both lost at first. The quiet was unsettling. Kallie was used to a revolving door, we were always coming or going.  But now time stood still. I always wondered what she thought and if she knew what had happened to her “Grandpa”. I’m sure she was confused. Wherever I went, she went. She stayed with me out on the couch until I was ready to go back into our bedroom. The first time back into the bedroom she jumped up on the bed and we cried together. We knew life would never be the same again, but we also knew we had each other.

Now over 4 years later the time has come when I need to say goodbye and she is going to join “Grandpa” in heaven. She has had a good life. She has been loved and she has loved much. She was here for me when I needed her most and now it is time for her to jump into Grandpa’s arms and let him love her for awhile. Will I miss her, absolutely. But I have learned over the years that it is remembering the good times that make the hard times less painful. And I have many memories to hold on to.

So, go be with Grandpa, little Kallie. And deliver a message from me…tell him how much I miss him and go run in those streets of gold.

Thanks for loving me so faithfully,